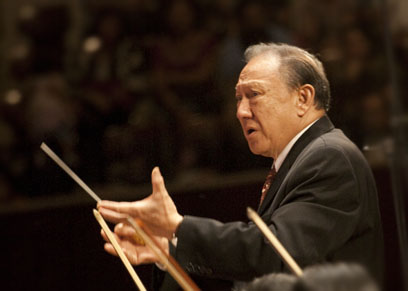 In December 2008, Dr. Tong once again took Jakarta in storm when 9000 people attended his two performances of Handel's complete Messiah Choruses in Cathedral Messiah. In that 2 performance, more than 200 members of Jakarta Oratorio Society choir and orchestra performed under his baton. These events accentuate his achievement-the largest audience in the history of classical music performance in Indonesia.

Dr. Tong - fatherless at the age of 3 - was born with extraordinary sensitivity to all forms of arts including music, painting, architecture, and sculpture.· Since his childhood, he quietly observed, meditated, and learned these arts thoroughly. With endless interests and unceasing struggles, he challenges his limit to master his desires. Composing music since the age of 16 and conducting oratorio at 17, he has ever since conducted oratorio and church music both in South East Asia Bible Seminary and the churches he served.

In 1986 he founded Jakarta Oratorio Society, which carried out concerts in jakarta and occasionally in other cities. Dr. Tong personally led the society in several regional concert tours in Singapore, Kuala Lumpur, Hong Kong, Taiwan, and Penang. These concerts were well attended by thousands of people, and Dr. Tong obtained remarkable recognition from his viewers.

Greatly blessed by the Lord, the autodidact old man has witnessed his dreams gradually coming true. One of the most recent fulfillment of his dreams is through the erection of Cathedral Messiah in 2008. The Cathedral's completion immediately caught the attention of journalists from Singapore, Australia, Germany, France, and Holland, and gained special coverage in Reuter and the Wall Street Journal.

In October the newly built Aula Simfonia Jakarta in Reformed Cultural Center will be dedicated to God and to the Indonesian people with the presentation of 4 inauguration concerts on the 17th, 18th, 23rd, and 24th. The world renowned San Diego Symphony Music Director, Dr. Jahja Ling, will come to conduct together with Dr. Stephen Tong, who is the Artistic Director on some master works by Bach, Beethoven, Handel, and Haydn. It is our hope that this Aula hall will be a new home to the classical music lovers all over the world. 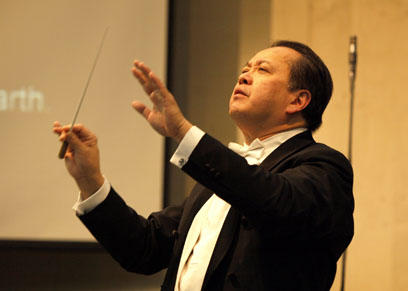 Jahja Ling's distinguished career as an internationally renowned conductor has earned him an exceptional reputation for musical integrity, intensity, and expressivity. Mr. Ling is the first and only conductor of Chinese descent who has conducted all of the major orchestras in the North America including Atlanta, Boston, Cleveland, Chicago, Cincinnati, Houston, Los Angeles, Minnesota, New York, Philadelphia, Pittsburgh, San Francisco, St. Louis, and most of prominent orchestras in Asia and Europe.

Mr. Ling holds one of the longest continuous relationship with one of the world greatest orchestras, The Cleveland Orchestra. He first served as Associate Conductor in 1984-85 season, and then as Resident Conductor for 17 years from 1985 to 2002 and as Blossom Festival Director for 6 seasons (2000-2005). Since then he has continued to appear as guest conductor of the Orchestra in every season for the last 25 years. This season he is returning to both Severance Hall and Blossom Festival to celebrate his 25th anniversary with that esteemed ensemble. In addition, he has conducted the Orchestra in over 450 concerts and 600 works in all types of concerts including tours and many world premiere performances.

Among his distinguished services as Resident Conductor, Mr. Ling led the orchestra's annual concert in downtown Cleveland, heard by more than a million people since first presented in 1990. His telecast of "A Concert in Tribute and Remembrance" with the Orchestra for 9/11 received an Emmy Award. The U.S. House of representatives presented a Congressional Record of his outstanding achievements in the U.S. Capitol in September 2006.

This season, Mr. Ling is in his fifth season as Music Director of the San Diego Symphony. In response to the community's overwhelming support of the orchestra's new Music Director, the Mayor of San Diego proclaimed October 2, 2004 as Jahja Ling Day in a grand gesture of welcome. Since then, his performances have received the highest praise from the public and critics alike.

The San Diego Symphony performances conducted by Jahja Ling have been broadcast both locally and nationally and recently released three new live recordings (the Symphony's first in a decade). (The Orchestra has undertaken many commissions as well as premieres of many new works and has recorded new works of Bright Sheng for Telarc Records to be released on August 25, 2009. Some live performances are available via www.instantencore.com.) Under his leadership, audience attendance has consistently increased and the orchestra has reached a new level of unprecedented financial stability.

In May 1997, Mr. Ling led the Scottish Chamber Orchestra on tour to Hong Kong as part of the celebrations marking the return of Hong Kong to China. In this and upcoming seasons Mr. Ling returns as guest conductor with the China Philharmonic, The Cleveland Orchestra, Columbus Symphony, Guangzhou Symphony, Hong Kong Philharmonic, Jakarta Symphony Orchestra, Philharmonia Taiwan, Rochester Philharmonic Orchestra, Singapore Symphony, and Taiwan National Symphony and he makes his debut with the Macao Symphony and Royal philharmonic in London. In May 2000, his debut performance with the St. Louis Symphony and cellist Yo-Yo Ma was featured on the ABC News program 20/20. He also demonstrates a strong commitment to working with young musicians and has conducted the orchestras of the Juilliard School, the Curtis Institute, and the Aspen Music Festival.

Mr. Ling is acclaimed not only for his interpretation of the standard repertoire, but also for the breadth of contemporary music included in his programs. Among the world premieres he has conducted are works by William Bolcom, Paul Chihara, Daniel Kellogg, George Perle, Bright Sheng, Alvin Singleton, Augusta Read Thomas, Mark Anthony Turnage, and Ellen Taaffe Zwilich, with orchestras such as The Cleveland Orchestra, the Detroit Symphony, the Florida Orchestra, and the New York Philharmonic, the San Diego Symphony among others.