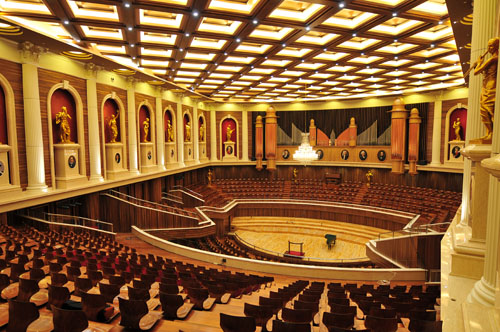 Aula Simfonia Jakarta boasts a seating capacity of almost 1,500 seats, including choir and orchestra seats. Located in Kemayoran, a district within Central Jakarta, it is both strategically placed and designed by Stephen Tong. With his distinctive fusion of sharp architectural insight and strong artistic value, this fine concert hall is able to reach its level of superb acoustics. The highly accomplished acoustics with exceptional reverberation and early reflection level allow only the purest of sound to roam around the concert hall.

Featuring a stage made of pine wood strategically placed in the center of the six-story hall, audiences at every seat can enjoy an unobstructed and clear view of the performance. Moreover, the concert hall is further complemented by its impressive lineup of special musical instruments. Featuring the renowned concert grand piano Model D from Steinway & Sons, this concert hall does not compromise on its offerings. Truly, Aula Simfonia Jakarta is a home for classical music and all of its enthusiasts in Indonesia.

Despite having an impressive lineup of special music instruments, the real highlight of Aula Simfonia Jakarta is its pipe organ which features 3,217 pipes, 57 ranks, and 3 manuals. Built in 1962 by Casavant Frères, this Canada-original organ weighs around a staggering 20,000 pounds. This musical instrument brings out the peak of this concert hall.

Pipe organ is one of the oldest musical instruments which possess a wonderful and natural sound. Back in the early 12th century, most churches in the West would have at least one pipe organ. Every pipe represents its own individual tone, and for its lack of modern touch, it makes up in the intricate construction of every pipe. The craftsmanship itself is a statement of elegance and nobility — not to mention the sound.

Today’s younger generations have been severely scanted from the knowledge about this grand instrument. The pipe organ is almost forgotten by the younger generations, as a tale as old as time. Too many modern music emphasize and lead us to love music from our sentimental side. This is contrary to the desire of God, who created music as a way to nurture us and lead us to recognize his glory. May the Lord be glorified through our artistic endeavors with the talents and gifts that he has given. Amen.